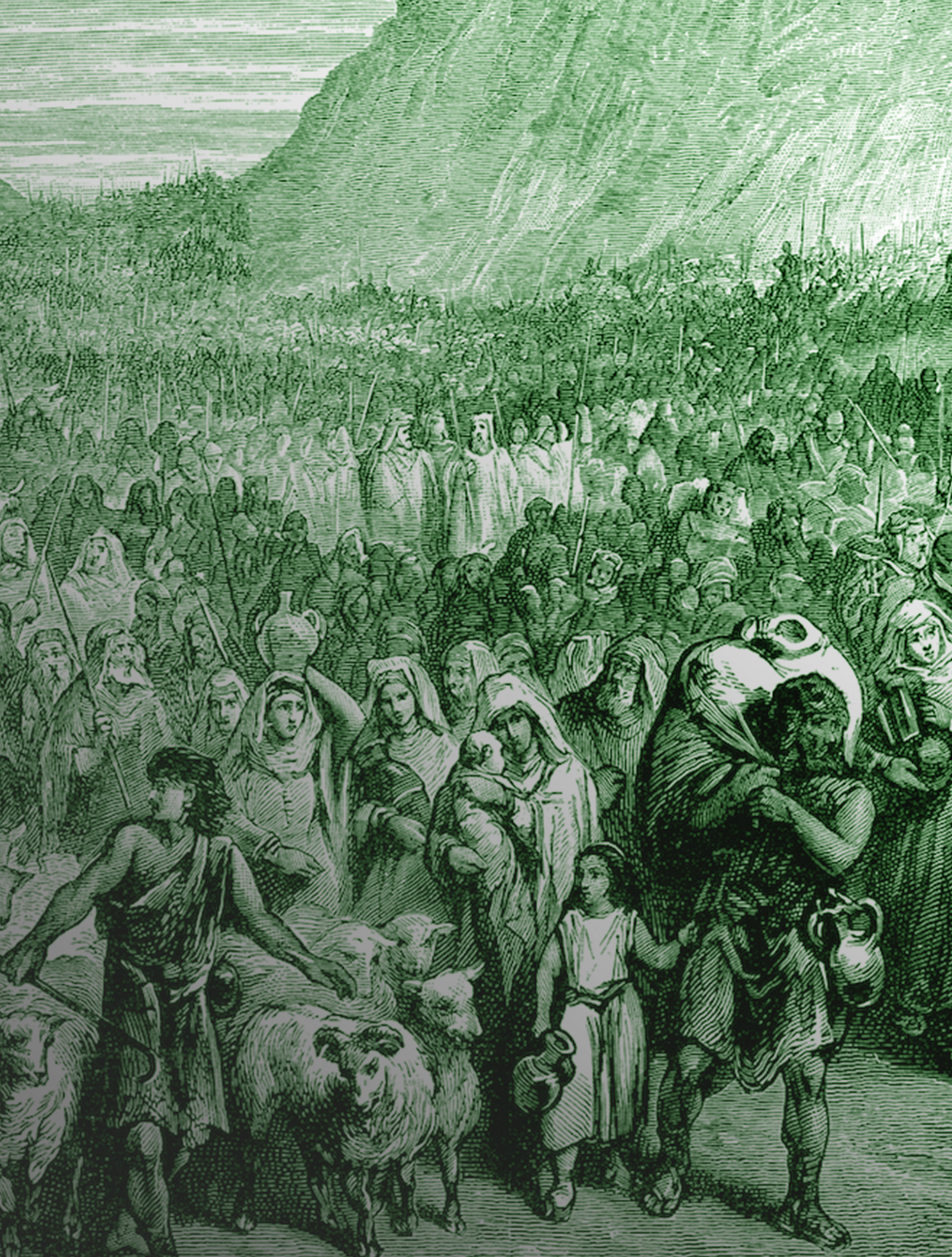 Wander and Whine
The Israelites enter the wilderness for the first time. Compared to Egypt, the breadbasket of the Mediterranean, entire families find themselves without food and water—a very scary situation.
Study

4 Then the Lord said to Moses, “Behold, I am about to rain bread from heaven for you, and the people shall go out and gather a day's portion every day, that I may test them, whether they will walk in my law or not. 5 On the sixth day, when they prepare what they bring in, it will be twice as much as they gather daily.” 6 So Moses and Aaron said to all the people of Israel, “At evening you shall know that it was the Lord who brought you out of the land of Egypt, 7 and in the morning you shall see the glory of the Lord, because he has heard your grumbling against the Lord. For what are we, that you grumble against us?” 8 And Moses said, “When the Lord gives you in the evening meat to eat and in the morning bread to the full, because the Lord has heard your grumbling that you grumble against him—what are we? Your grumbling is not against us but against the Lord.”

13 In the evening quail came up and covered the camp, and in the morning dew lay around the camp. 14 And when the dew had gone up, there was on the face of the wilderness a fine, flake-like thing, fine as frost on the ground. 15 When the people of Israel saw it, they said to one another, “What is it?” For they did not know what it was. And Moses said to them, “It is the bread that the Lord has given you to eat. 16 This is what the Lord has commanded: ‘Gather of it, each one of you, as much as he can eat. You shall each take an omer, according to the number of the persons that each of you has in his tent.’” 17 And the people of Israel did so. They gathered, some more, some less. 18 But when they measured it with an omer, whoever gathered much had nothing left over, and whoever gathered little had no lack. Each of them gathered as much as he could eat. 19 And Moses said to them, “Let no one leave any of it over till the morning.” 20 But they did not listen to Moses. Some left part of it till the morning, and it bred worms and stank. And Moses was angry with them. 21 Morning by morning they gathered it, each as much as he could eat; but when the sun grew hot, it melted.

22 On the sixth day they gathered twice as much bread, two omers each. And when all the leaders of the congregation came and told Moses, 23 he said to them, “This is what the Lord has commanded: ‘Tomorrow is a day of solemn rest, a holy Sabbath to the Lord; bake what you will bake and boil what you will boil, and all that is left over lay aside to be kept till the morning.’” 24 So they laid it aside till the morning, as Moses commanded them, and it did not stink, and there were no worms in it.25 Moses said, “Eat it today, for today is a Sabbath to the Lord; today you will not find it in the field. 26 Six days you shall gather it, but on the seventh day, which is a Sabbath, there will be none.”

31 Now the house of Israel called its name manna. It was like coriander seed, white, and the taste of it was like wafers made with honey.32 Moses said, “This is what the Lord has commanded: ‘Let an omer of it be kept throughout your generations, so that they may see the bread with which I fed you in the wilderness, when I brought you out of the land of Egypt.’” 33 And Moses said to Aaron, “Take a jar, and put an omer of manna in it, and place it before the Lord to be kept throughout your generations.” 34 As the Lord commanded Moses, so Aaron placed it before the testimony to be kept. 35 The people of Israel ate the manna forty years, till they came to a habitable land. They ate the manna till they came to the border of the land of Canaan. 36 (An omer is the tenth part of an ephah.)

Water from the Rock

17 All the congregation of the people of Israel moved on from the wilderness of Sin by stages, according to the commandment of the Lord, and camped at Rephidim, but there was no water for the people to drink. 2 Therefore the people quarreled with Moses and said, “Give us water to drink.” And Moses said to them, “Why do you quarrel with me? Why do you test the Lord?” 3 But the people thirsted there for water, and the people grumbled against Moses and said, “Why did you bring us up out of Egypt, to kill us and our children and our livestock with thirst?”4 So Moses cried to the Lord, “What shall I do with this people? They are almost ready to stone me.” 5 And the Lord said to Moses, “Pass on before the people, taking with you some of the elders of Israel, and take in your hand the staff with which you struck the Nile, and go. 6 Behold, I will stand before you there on the rock at Horeb, and you shall strike the rock, and water shall come out of it, and the people will drink.” And Moses did so, in the sight of the elders of Israel. 7 And he called the name of the place Massah and Meribah, because of the quarreling of the people of Israel, and because they tested the Lord by saying, “Is the Lord among us or not?”